On April 13, 1990, the charter members of the Greater Utica Sports Hall of Fame were announced in the lobby of Utica City Hall.

Among the inductees are people who made names for themselves in every sport imaginable.  These fine athletes, coaches, officials, administrators, executives, and supporters have achieved fame, fortune, respect and admiration from all over the United States.  The Utica area’s athletic heroes have impacted the sports world in every corner of the country and in several parts of the world.  The members of the Greater Utica Sports Hall of Fame have shined bright lights on our area through their tremendous accomplishments on and off of the field of play.  All should be proud that their careers began here.

Latest From Our Newsroom 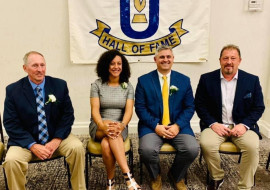 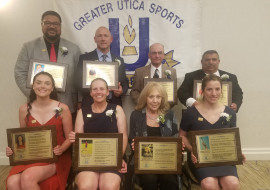 Three To Be Inducted Into Greater Utica Sports Hall Of Fame

Seven standout athletes and an award-winning broadcaster have been selected for the Greater Utica Sports Hall of Fame’s Class of 2022.

The Greater Utica Sports Hall of Fame's annual induction ceremony and banquet will be held Sunday, September 18 at Delta Hotels by Marriott in downtown Utica. Tickets, available at CNY Awards and Apparel in the New Hartford Shopping Center, are $50 for adults and $25 for those under 18.

Myslinski, son of longtime Rome Free Academy assistant football coach Tom Myslinski, was an All-Southeastern Conference lineman at the University of Tennessee, where he also starred in track and field. He had a long playing career in the National Football League, and has served as strength and conditioning coach for several NFL teams.

Burton and Babiarz are two of the most accomplished basketball players ever from the Mohawk Valley. Burton starred at Ithaca College, Babiarz at Potsdam State, and both earned numerous honors, including multiple All-American selections.

Brown was an outstanding football and track and field athlete at Thomas R. Proctor and Notre Dame High Schools before going on to start for four seasons in the defensive backfield at Ohio State, making the All-Big 10 team twice.

Mauro, a graduate of Notre Dame High School, won many honors as a baseball player at the United States Naval Academy, where he played with his brother, Steve.

Paladino was a star soccer player at Notre Dame High School, winning New York State Class C Player of the year honors in 2001. She went on to St. John’s University, earning All-Big East designation and where she remains among the school’s all-time leaders in goals and points.

Jackson, a New York Mills High School and Syracuse University graduate, is an award-winning broadcaster. He spent the early years of his career at WIBX Radio in Utica, and has been the television voice of the Philadelphia Flyers for nearly 30 years.

Hobin, who died in 2020 at age 46, earned 10 varsity letters at Holland Patent High School and 11 more in basketball, softball, and field hockey at Hofstra University. She twice was Hofstra’s Female Athlete of the Year and is a member of the school’s Hall of Fame.

Latest From Our Newsroom

Three To Be Inducted Into Greater Utica Sports Hall Of Fame